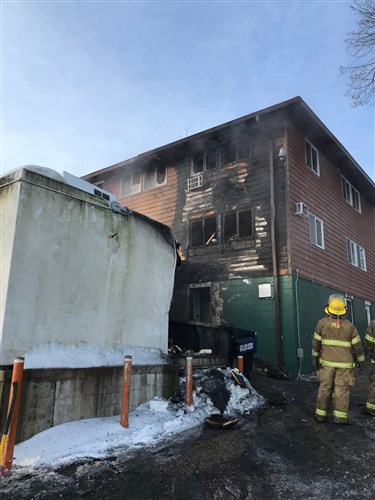 On Dec. 21, Koronis Ministries Camp and Retreat Center experienced a fire that significantly damaged its kitchen and part of its historic Lakeview Lodge. At 6 a.m. that day, an ice-fisherman on Lake Koronis called 911 to report a fire in the loading dock area outside of the camp’s kitchen, located on the lake side of Lakeview Lodge. Local firefighters arrived within minutes, but the flames had already worked their way up the exterior wall and into the camp’s administrative offices. The fire also engulfed a walk-in freezer, and then spread from there into the food pantry, filling the kitchen with heat and flames, and the rest of Lakeview with acrid smoke from the burning supplies. Thankfully, no guest groups were present at the time of the fire, and the four people in the building all got out safely.

By the time the fire was extinguished, the kitchen, administrative offices, and one guest room were extensively damaged. However, thanks to the quick response from the Paynesville Fire Department, the lodge was structurally saved. Fire inspectors were not able to pinpoint the exact cause of the fire, but foul play was not suspected. The lodge is the oldest structure on the property, completed for the ministry’s first summer in 1922. It houses the camp’s kitchen, dining room, offices, camp store, and an 86-bed dorm with lounge and meeting rooms.

The building was fully insured, and restoration efforts began almost immediately, with the goal of having the lodge and dining room totally functional in time for the busy summer season. This winter and spring, the retreat center is continuing to operate, using an off-site kitchen at nearby Grace UMC to cater meals to its guests in its unaffected lodges until the arrival of a temporary mobile commercial kitchen later this spring.

Before the fire occurred, the camp already was finalizing plans and permitting for the $2.6 million phase I of its Tabernacle project, which includes a 325-seat, state-of-the-art meeting venue on the upper level of the new structure, but leaves unfinished the lower-level of the structure for future kitchen and dining room space. Construction of this first phase is expected to begin shortly, and when the additional $700,000 in funding is secured, the camp hopes to seamlessly extend construction into the lower level kitchen and dining room part of the project (phase II), with total Tabernacle completion slated for sometime early in 2021.

Koronis Ministries Executive Director Dan Ziegler sees God at work in the midst of the challenges.

“In scripture, there is a beautiful metaphor from Isaiah 61, where God promises to redeem Israel’s mourning, exchanging ‘beauty for ashes,’” Ziegler said. “As we clean up the ashes of destruction here at Koronis, we do so believing that God will work in our midst to move this growing ministry forward into a beautiful future of service to the church. If the people of God respond, by next year we will see the camp powerfully retooled for its 100th anniversary, with a totally restored Lakeview Lodge and the completion of our long-awaited Tabernacle on both levels, ready to serve as a gathering place for the church.”

Koronis Ministries, a camp and retreat center in Paynesville, is one of three camp sites owned by the Minnesota Conference.

Friends of Koronis Ministries are encouraged to donate to give in support of the fire recovery efforts.